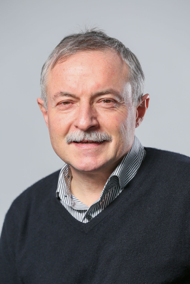 Paul Muralt is titular professor at Swiss Federal Institute of Technology EPFL at Lausanne, Switzerland. He leads a group working in electroceramic thin films within the Materials Science Institute, studying particularly piezoelectric and solid ionic MEMS and NEMS devices. Having a background (PhD) in solid state physics, he moved more and more into thin films, surface, and materials science for micro and nanotechnology. In his professional career he was working at the Swiss Federal Institute of Technology ETH, the IBM Research Laboratory in Zurich, the Free University of Berlin, and in a thin film coating industry (Balzers) before joining the Ceramics Laboratory at EPFL in 1993. His PhD studies dealt with incommensurate crystalline phases in an organic-inorganic layered perovskite structure. As a post-Doc, he pioneered scanning tunneling potentiometric imaging. Today, he is particularly known for his works in processing, characterization and applications of piezoelectric and pyroelectric thin films such as PbZrTiO3 and Al1-xScxN, including also works on materials integration, micro machining, and device physics. He teaches thin film deposition, micro and nano structuration, surface analysis and introduction to ceramics. He authored or co-authored over 250 scientific articles. He is IEEE Fellow, received the outstanding achievement award of the International Symposium of Integrated Ferroelectrics (ISIF) in 2005, and the C.B. Sawyer award from the IEEE International Frequency Control Symposium in 2016. He acted as co-chair of the MRS spring meeting 2008, co-organized MRS and E-MRS symposia, served in program committees of ISAF and ISIF conferences, and of the European Meeting on Ferroelectricity. He was an IEEE distinguished lecturer in 2017.

Jürgen Rödel received a diploma in Materials Science from University of Erlangen-Nürnberg in 1983 and a Ph.D. from UC Berkeley in 1988 as well as a habilitation in Materials Engineering from Technische Universität Hamburg-Harburg (TUHH) in 1992. He held postdoc positions at the National Institute of Standards and Technology and at TUHH. Since 1994 he works as a professor at TU Darmstadt. He is an honorary professor at USTB and currently a distinguished visiting professor at Tsinghua University (Beijing) as well as a specially appointed professor at Tokyo Institute of Technology, Japan. Rödel is the author and co-author of 300 refereed publications. Over the years his research covered sintering, mechanical properties, electrical reliability, lead-free piezoceramics and dislocation-tuned functionality. He received the highest awards by the Deutsche Forschungsgemeinschaft for young (Heintz-Maier-Leibnitz prize) and for senior (Leibniz-Prize) scientists in Germany and is member of the National Academy of Science and Technology. He also received the IEEE ferroelectrics recognition award.

Prof. Guus Rijnders is a professor at the University of Twente, the Netherlands. He obtained his PhD on October 31, 2001 on “Initial growth of complex oxides: study and manipulation”. In 2001 he became assistant professor at the Low Temperature Division, Applied Physics, University of Twente. In 2003 he switched to the Inorganic Materials Science group and since 2006 he was associate professor in this group. As of April 1st, 2010 he is full professor in nanoelectronic materials at the MESA+ Institute for Nanotechnology, University of Twente. As from 2015 he is Scientific director of the MESA+ Institute for Nanotechnology. The research of Prof Guus Rijnders focuses on the structure-property relation of atomically engineered complex (nano)materials, especially thin film oxides, mostly used for electronic and sensing devices. The class of investigated materials includes, amongst others, ferromagnetic, superconducting, ferroelectric as well as piezoelectric materials. In recent years, he started new research directions in the field of functional and smart materials, such as piezoelectric and ferroelectric materials, and their integration with electronic and micro electromechanical systems (MEMS), Si-CMOS and III-V technologies.

Invited speaker from the Piezo Institute Jean-François SAILLANT is a research and development engineer at INTERCONTROLE / FRAMATOME at Chalon-sur-Saône, France. He works on the development of ultrasonic transducers for non-destructive evaluation of primary components of nuclear reactors. He received a PhD for his work on “multilayer piezocomposite structures applied to ultrasonic transducers” in 2006 at the University of Paisley, Scotland. After carrying out a post-doc at the same university, J-F Saillant joined INTERCONTROLE in 2008 where he leads R&D projects and acts as expert in instrumentation for the FRAMATOME nuclear group.

Key-note speakers will be selected based on the submitted abstracts.